The King Rail is a species that is very difficult to find and photograph well.  In fact, in the 2 years I have done the Photographic Big Year thing, I have only successfully photographed them once at Mackay Island National Wildlife Refuge on the North Carolina / Virginia border.  The below photo is from 2014.  In 2015 I tried and failed, but that being said I did not stay long because I was running late for a ferry.

Some folks say the rails at the Battleship in Wilmington are Kings, but I have only met Clappers or "Clings" there.  Clings are Clapper and King Hybrids.  In the gulf states region there are many more Kings but the problem there is that Clappers are generally more colorful so the ID problems are even worse.  There is nothing worse than a hybrid.  It is the lister's nightmare. 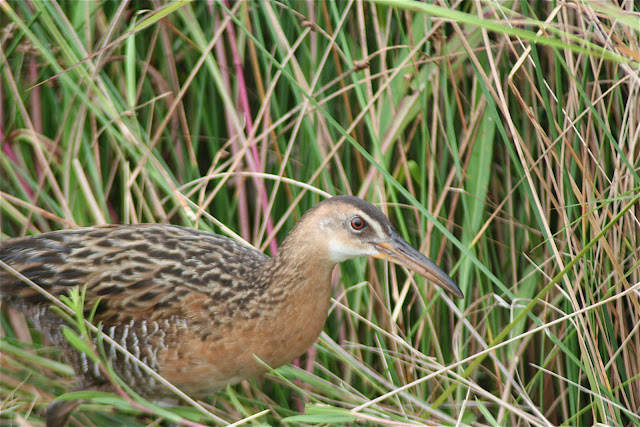 This particular bird looks pissed.  I believe it was momma bird and was trying to divert my attention from the little black downy babies.  That is another topic altogether, baby Kings and Clappers frequently get misidentified as Black Rails.  So be careful when you see a little black rail scurrying by, if it is late summer chances are it is a baby rail.
Rails in general are not doing very well and the range and numbers of the King Rail is no exception.  I wonder how much of that is due to hybridization versus habitat loss versus climate change (gasp....Jamie believes in climate change?  Hell yes I do).
I hope to go back to Mackay someday soon so I can properly crush some Kings.  Until then this pic will suffice.
Cheers.﻿
Posted by Jamie Adams at 4:29 AM