Can you think of a better Xmas present?  Actually I have seen them a number of times in the Bahamas where they winter but this one was especially cooperative and inquisitive.  The Kirtland's Warbler was nearly extinct 50 years ago.  Now with conservation efforts on it's breeding range in Michigan in Jack Pine stands it is on it's way to recovery.  I am not too worried about it's wintering grounds on the Bahamas because it prefers successional habitat with plenty of White Lantana which is not hard to come in Eleuthera.  In fact, even when big resorts pop up in Eleuthera, mismanagement and governmental red tape soon cause the business to fail and more successional habitat is generated. Eleuthera will probably be one of those places that will stay the same for a long time.  In fact global warming sea rise will probably be the biggest problem. 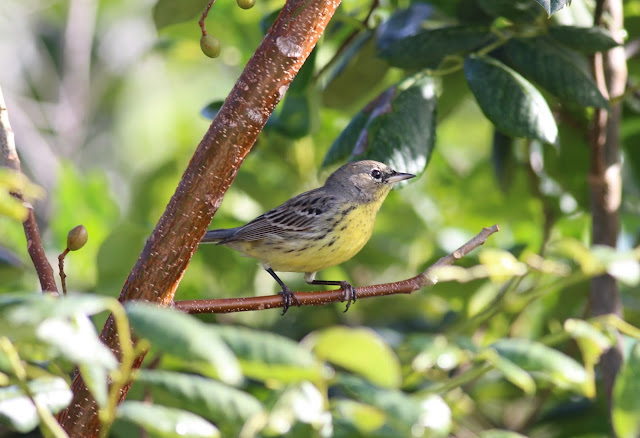 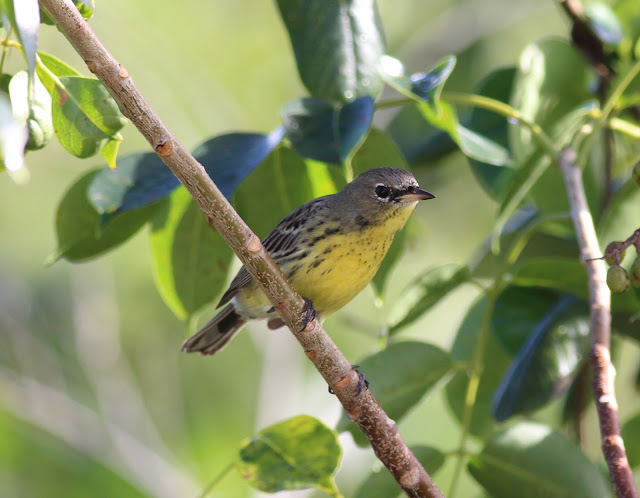 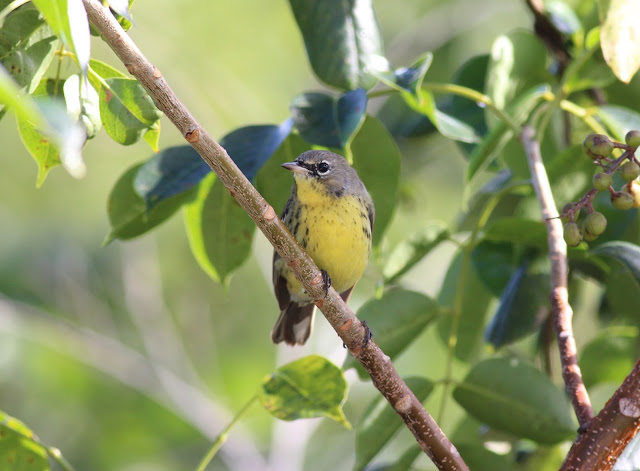 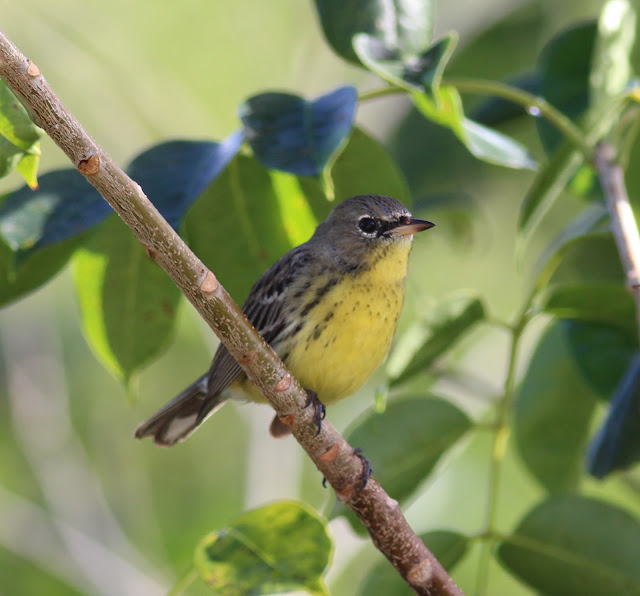 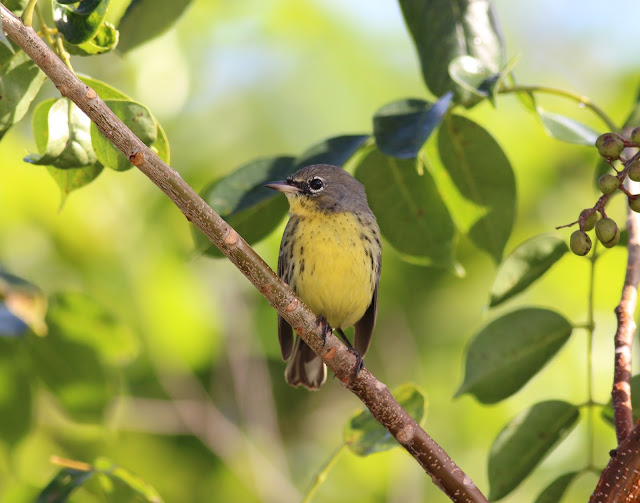 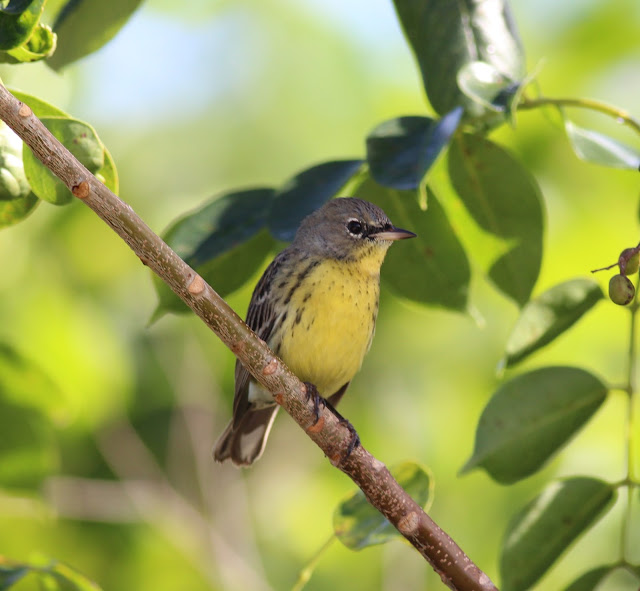 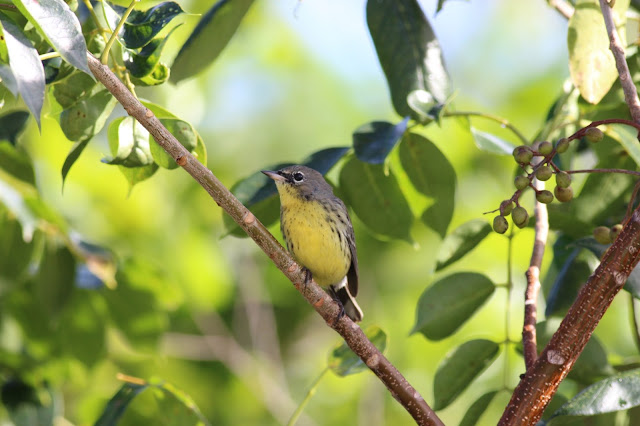 Below is a photo from the breeding ground in Michigan on 30May2018 where I managed to go as a quick side trip when I was in Chicago for work.  Tick for the ABA!  Note the jack pine it is sitting in which is the natural habitat. 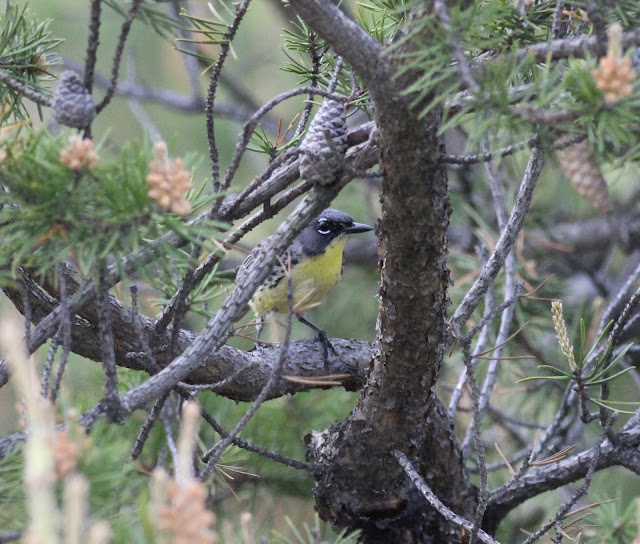 Update!  I have now seen one in NC!  Here is the photo of one that was hanging out at Ridge Junction in the mountains.  Taken on 26Sep2018. 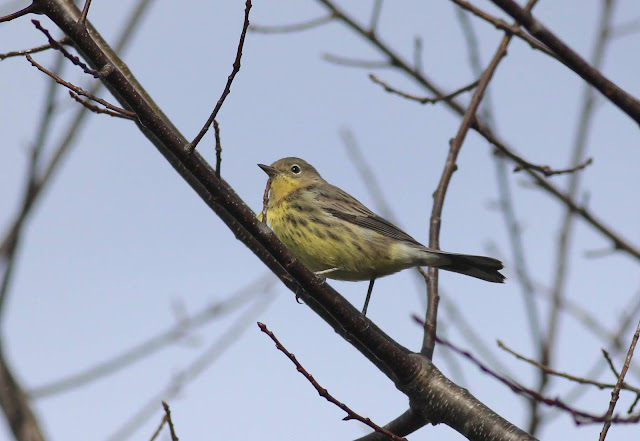 Snowy Plovers are pretty rare in NC but they do show up from time to time.  I have seen them in California, Texas and Florida where they are more common.  In California they are well protected by conservation efforts. 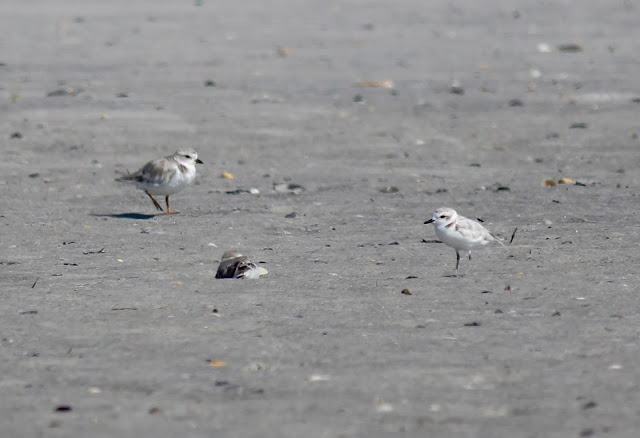 Nice comparison between a Piping Plover on the left and Snowy on the right.  These pictures were taken at Rich Inlet in Wilmington, NC. 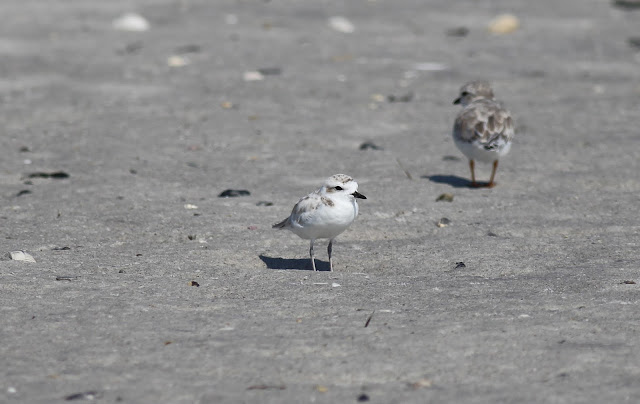 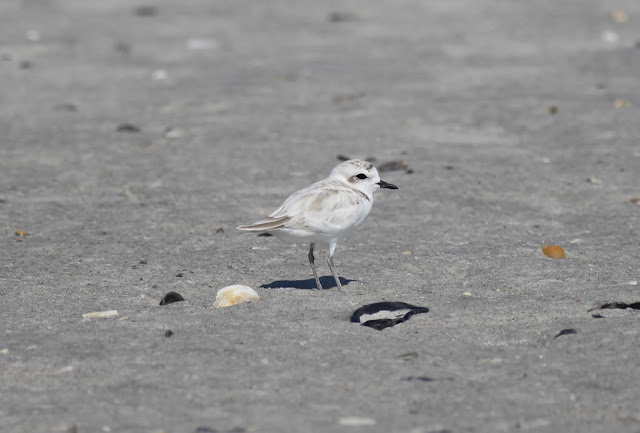 The following pictures were taken at Tijuana Slough in San Diego, CA. 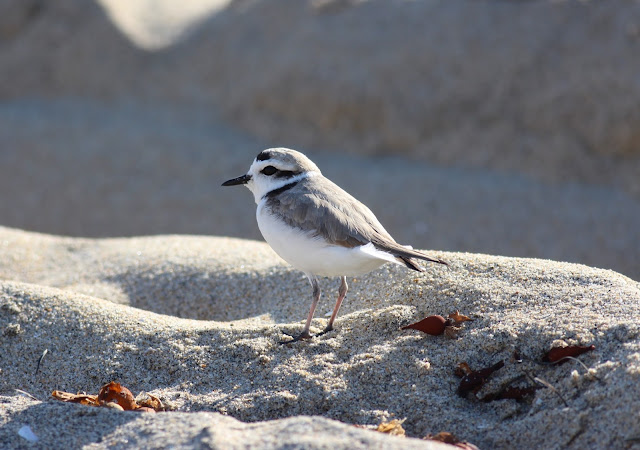 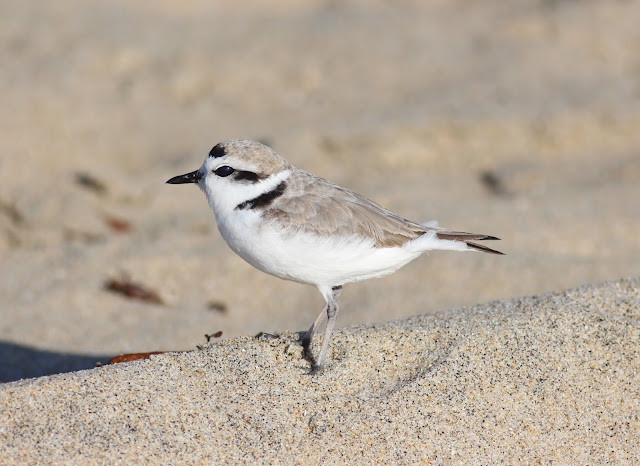 Posted by Jamie Adams at 6:46 AM No comments:

One of these days I am going to get one of these in breeding plumage.  But until then I am happy to ogle them as they are in North Carolina waters in the winter.

Tidbit from Wiki:  "Its bill is thin, straight and sharp, and the bird often holds it at an uptilted angle. Though the colour of the bill changes from black in summer to pale grey in winter, the timing of the colour change does not necessarily correspond to that of the bird's overall plumage change. The nostrils are narrow slits located near the base of the bill, and the iris is reddish. One of the bird's North American folk names is pegging-awl loon, a reference to its sharply pointed bill, which resembles a sailmaker's awl (a tool also known as a "pegging awl" in New England)."

In North Carolina in the winter we sometimes see massive flights of Red-throated Loons off shore.  The strange thing is that at Wrightsville Beach we mostly see Common Loons and in Carolina Beach only 8-10 miles away we almost exclusively see Red-throated.  Would be interesting to see what the difference in habitat is.  I believe CB is much murkier water as a result of the Cape Fear drainage, maybe that has something to do with it. 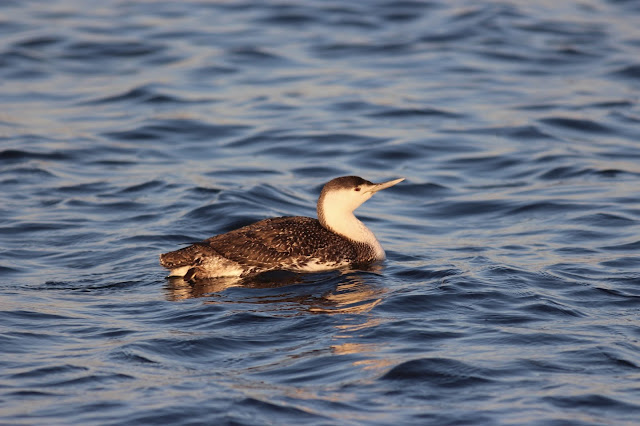 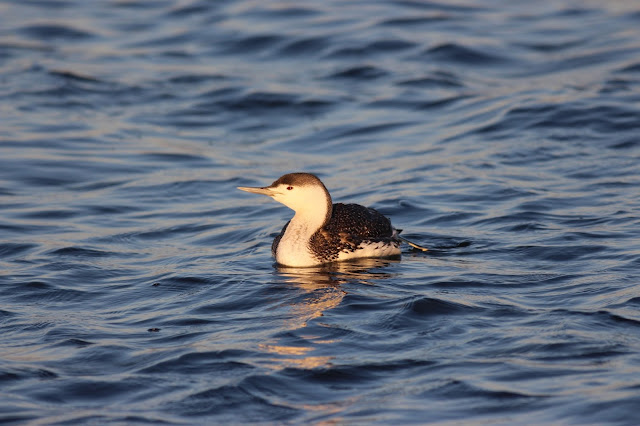 Posted by Jamie Adams at 6:47 AM No comments:

Per Wiki:  "Crossbills are characterized by the mandibles crossing at their tips, which gives the group its English name. Using their crossed mandibles for leverage, crossbills are able to efficiently separate the scales of conifer cones and extract the seeds on which they feed. Adult males tend to be red or orange in colour, and females green or yellow, but there is much variation.

In North America, nine distinct red crossbill variants (referred to as call types) differing in vocalizations as well as beak size and shape are recognized. Each call type evolved to specialize on different species of conifer."
Very cool, I should have paid attention on what type of conifer these were on.  Apparently most are Fraser Firs or Red Spruce.
I have heard that Red Crossbills will sometimes come down to the roadways or trails to eat grit which helps to digest the seeds that they feed on.  Well last weekend I was able to witness this at the Mt Mitchell Ranger's Station. 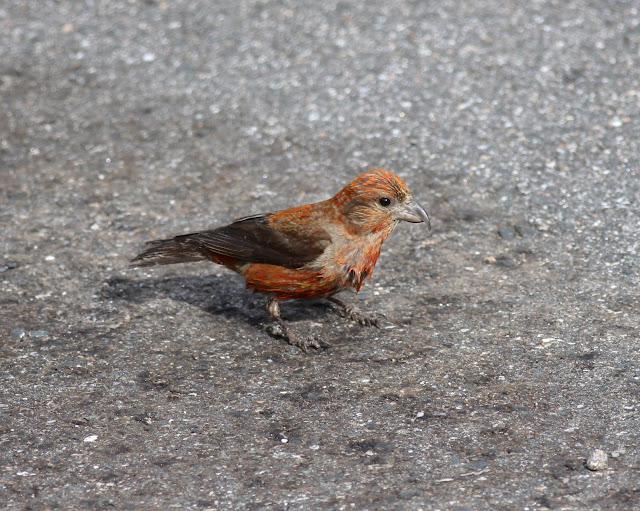 This poor individual had Bumblefoot which is a bacterial infection that commonly affects birds. 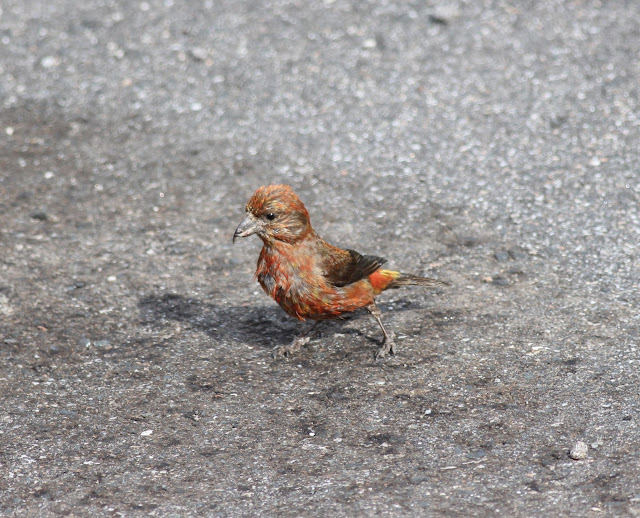 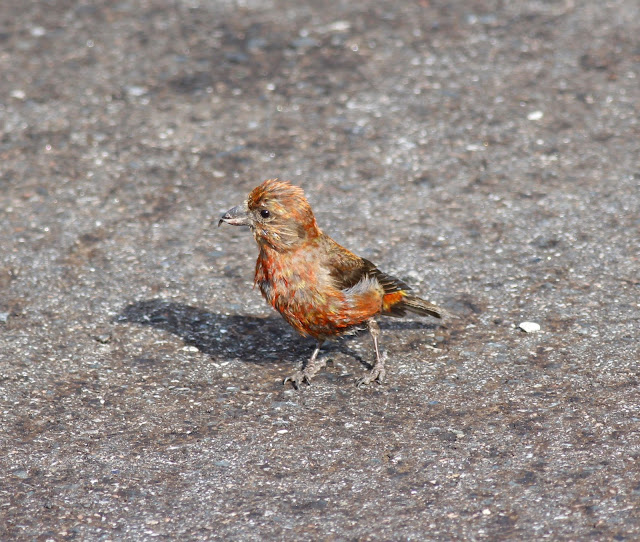 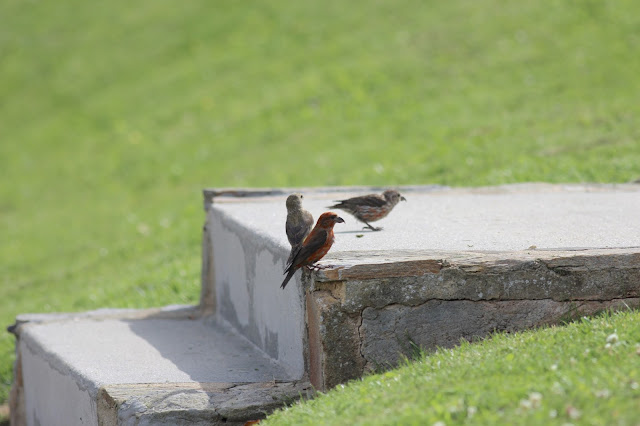 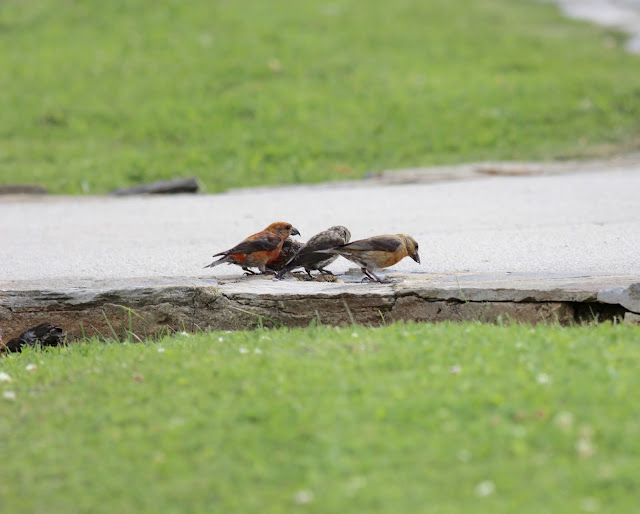 A family unit.  The male is red, the female is orange and the juveniles look like overgrown Siskins. 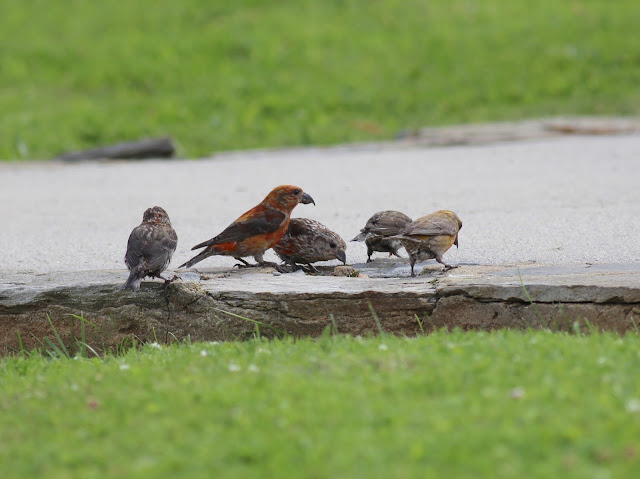 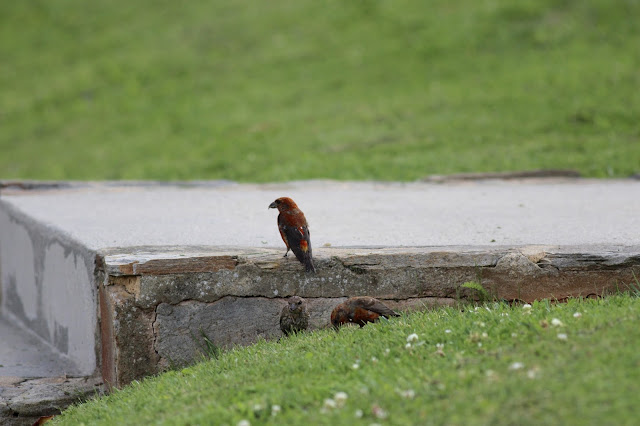