I went looking for the Bell's Vireo reported by Jelmer this morning at the Fort Fisher Aquarium and although I did not find it, I did get an interesting Kingbird which I initially believed was a Gray Kingbird.  I have seen them in Florida and the Bahamas and when I saw this bird land I immediately thought Gray Kingbird.  This despite Jelmer having reported an Eastern Kingbird the day before and that is also somewhat rare at this point as they have mostly moved on.   Unfortunately this bird flew quickly and although I did see it again, it was further away and did not stay there for more than a few seconds.

Here are the only three photos I got starting with an out of focus first shot that gives the best profile view. 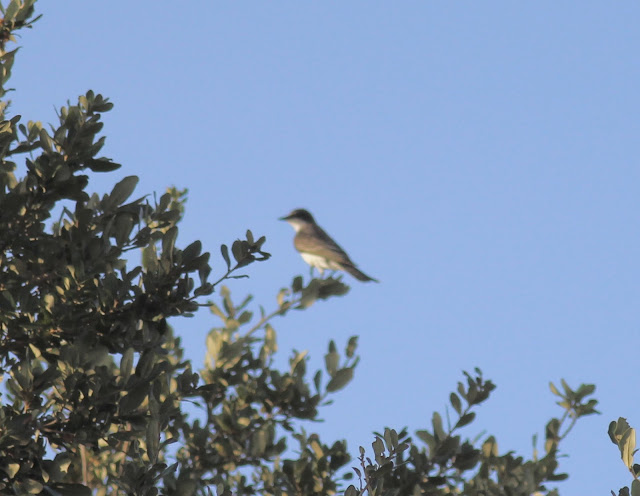 The most problematic issue is the bill was not as huge as I would have expected. I have seen online that the bill of a Gray Kingbird can be quite variable.  However the gray crown, lack of white tail tips and apparent mask all point to Gray Kingbird (Update: these are now believed to be light artifacts). 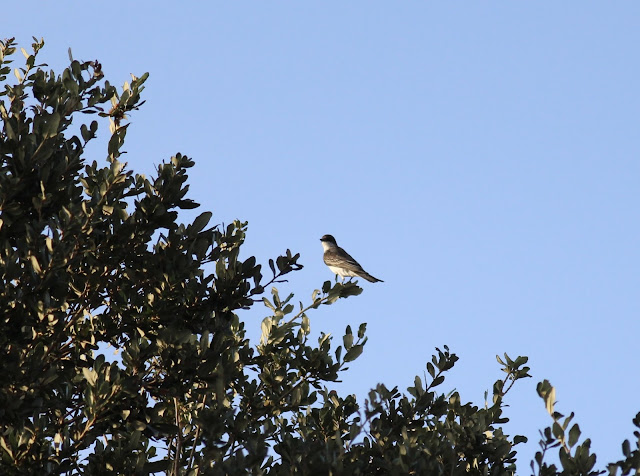 More in focus but bill not in profile so not sure it helps much. Also the light shining directly on his breast makes the back seem darker than it was.  When I saw him again albeit farther away he was facing away from me and it looked much lighter gray. Unfortunately I did not get a photo of that (Update: again probably light artifact as the morning sun was shining directly from the side). 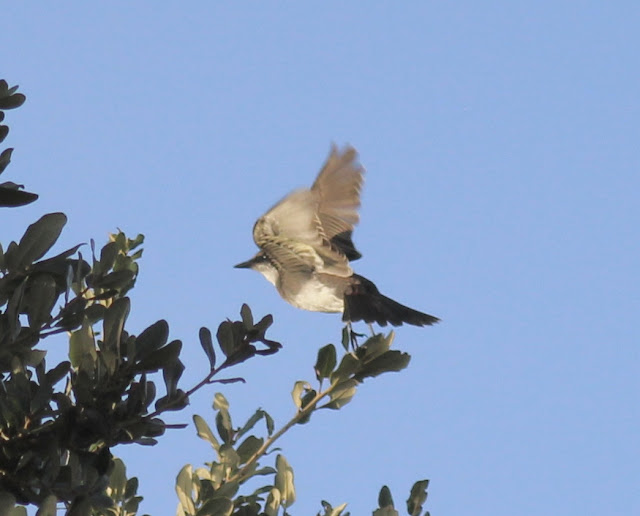 The money shot - mask evident on this shot, white underwings a little shadowed but definitely lighter than what I would expect on an Eastern Kingbird and no white tips to tail.  There is a very faint hint of lightening of tail tips but I think that is just light artifact not actual white color. Certainly in binocular views I could not see any definite white. (Update: apparently juvenile Eastern Kingbirds can sometimes has little to no white tips).

Finally, I could have sworn I heard the distinctive call shortly after the sighting in the general area he/she flew to.  My ears are notoriously bad so not much credence there.

Would be interested to hear if anyone has any strong feelings one way or another.  However, for now, i am going to report it as a Gray Kingbird. (Update - I had heard opinions for both, but the ones for Eastern are most compelling so I am going with Eastern).