People are always reporting Long-billed Dowitchers on the coast, and I have been looking for them all year.  I suspect many of the reports are not accurate.  Especially when I see a report with only Long-billed on it but no Short.  That would be highly irregular here on the coast.  So I was very happy when I found a couple that looked like good candidates.

First let's look at some passerines from earlier in the week. 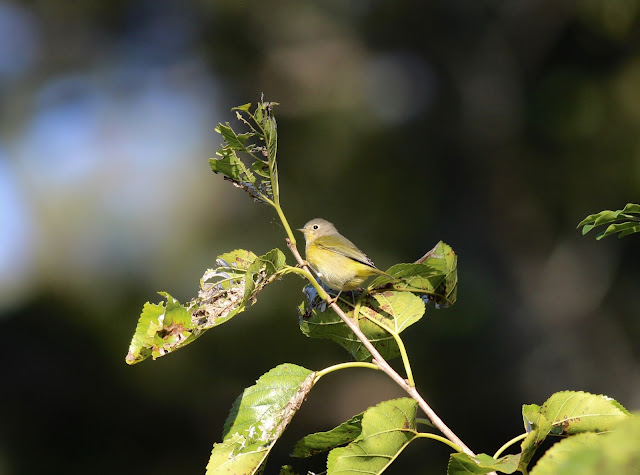 Nashville Warbler - Sam and I had some good movement on Sunday at Burnt Mill Creek. Not too much variety but some good ones. 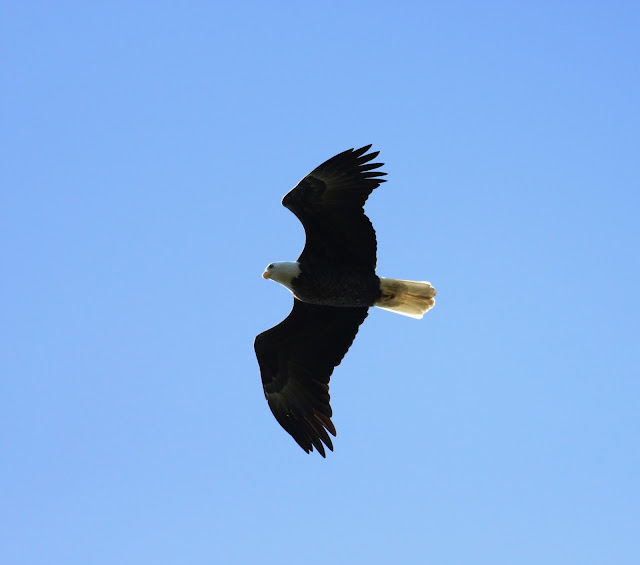 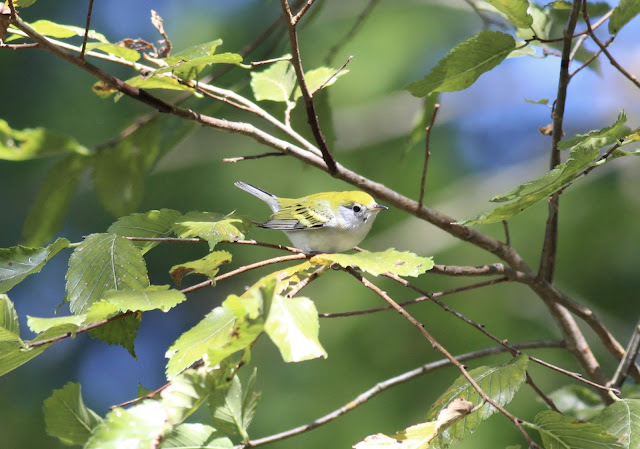 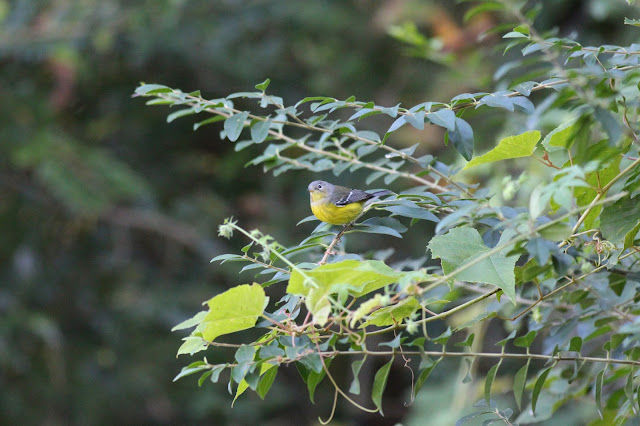 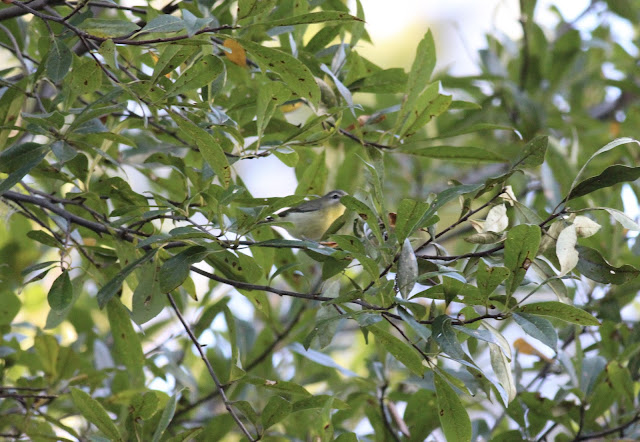 Another Philadelphia Vireo - this is probably my 5th one in one week. 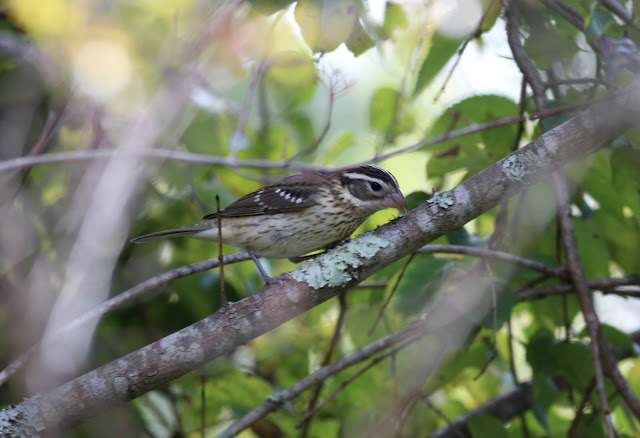 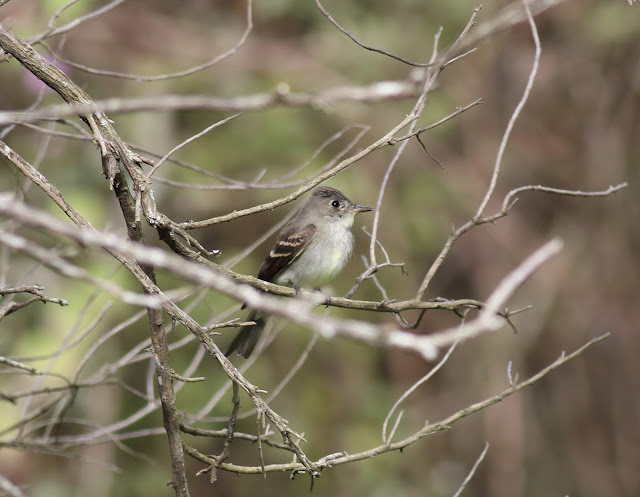 Initially I thought this was my Willow again, but the eyeing was not pronounced enough. 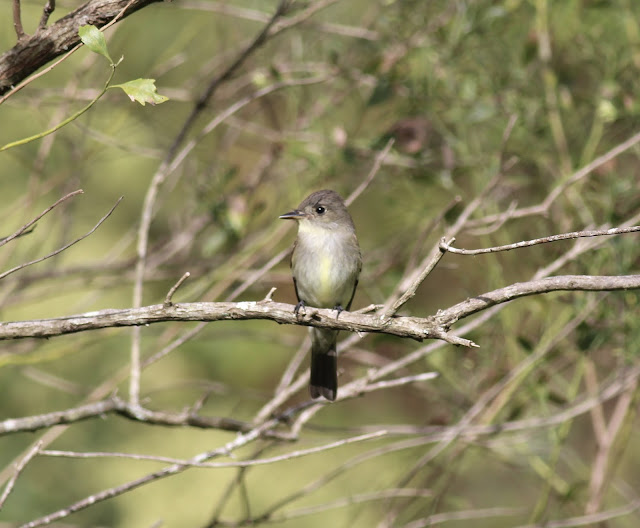 Here it looks like a Pewee.  A vest and long tail. 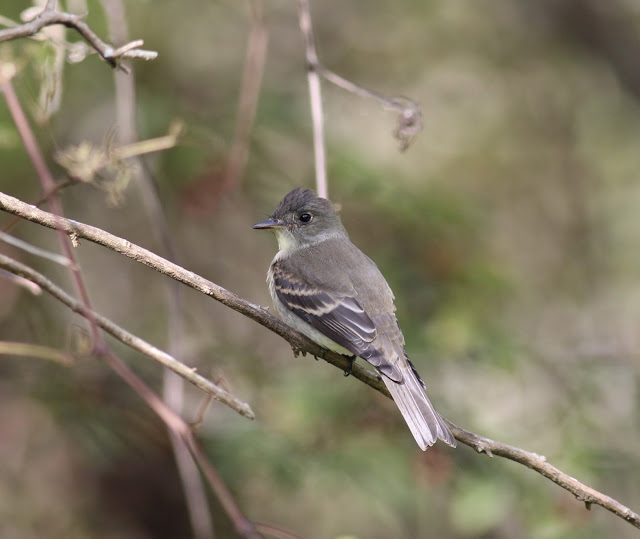 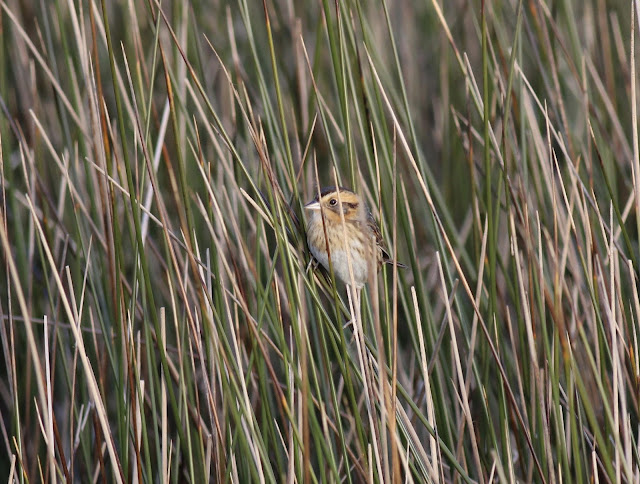 The sharp-tailed sparrows are back at Fort Fisher.  I think this one was a Saltmarsh based on the contrast between the orange on the malar and breast. 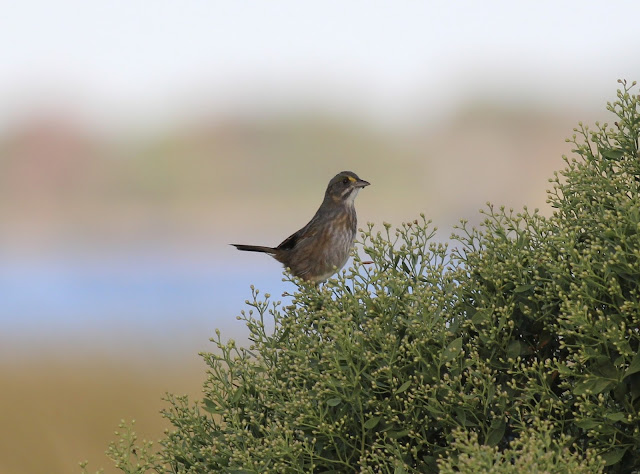 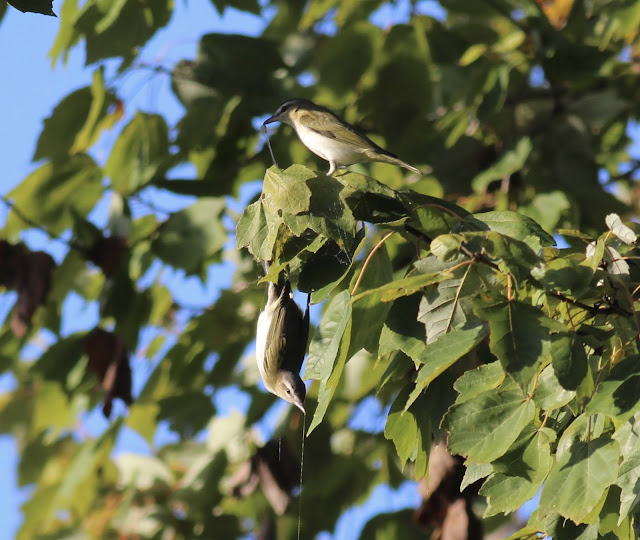 This was a harrowing experience.  I was on a teleconference and watching this poor Red-eyed Vireo stuck in a spider web across the creek.  His buddies were trying to help and pulling webs. At one point there was 5 REVI all tugging away trying to free him/her.  After about 15 minutes of hanging there he/she made one more valiant effort and finally was free.  I wonder how many song birds die this way. 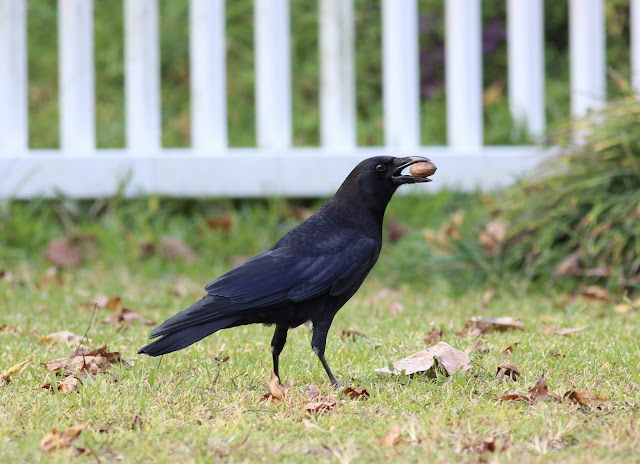 Fish Crow with a Pecan. 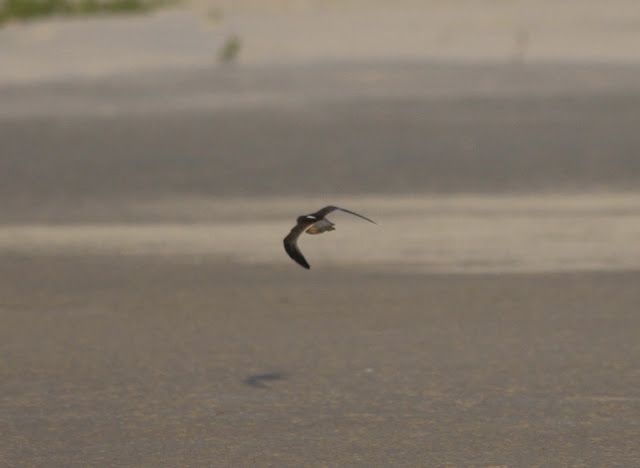 Spoiler alert, a Long-billed Dowitcher was spooked before I was able to get a pic.  I heard it call.  However, it joined a big flock of Dowitchers 100 yards away and when I made it over, I had to look for it all over again. 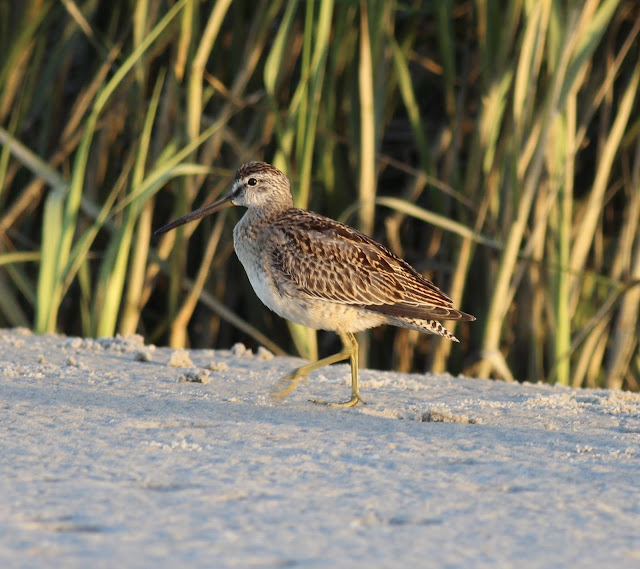 Short-billed Dowitcher - note the shorter, kinked bill at the far end.  Also note the "tiger stripes" on the tertials.  Another mark, look at the white and black striped on the tail.  The spacing is about the same width.  Keep that in mind.  Now a final mark, the loral angle!  The loral angle is the angle that forms between the plane of the bill and the imaginary line drawn from the gape (corner of mouth) to the eye.  On a SB Dowitcher the loral angle is obtuse.  Meaning it is fairly pronounced giving the supercilium (eye brow) a more arched look. 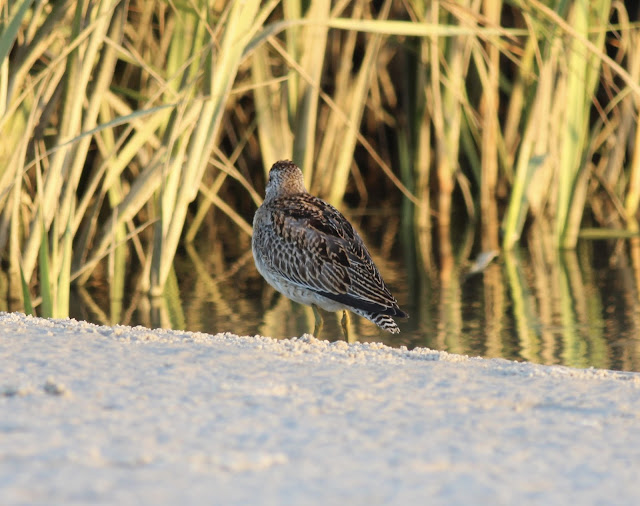 Another look at the tail stripes on a SB. 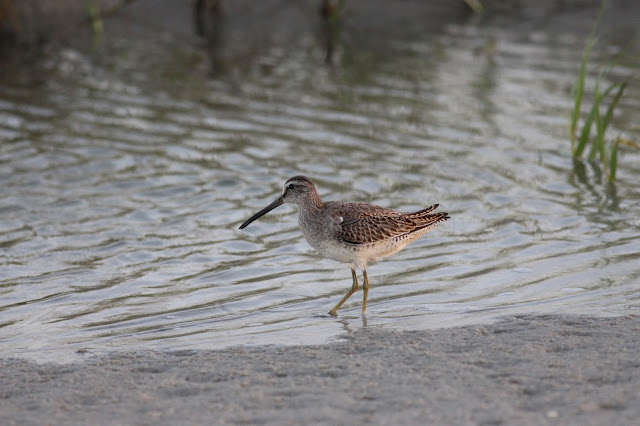 Another SB.  Look at that loral angle! Good stuff. 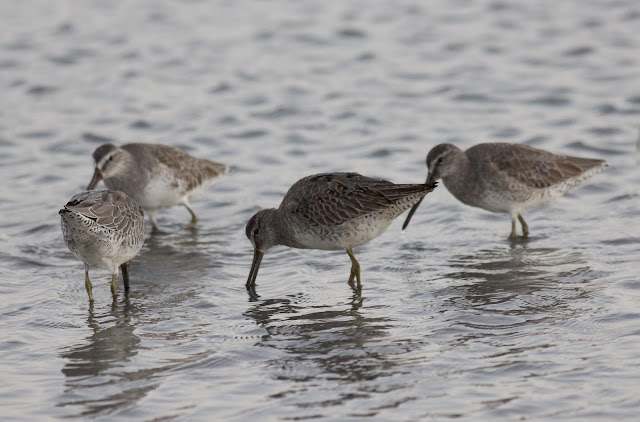 Then I saw this monster!  Looks like he/she swallowed a soft ball.  Some of the write ups I have been reading say a LB Dowitcher looks like a football with a head.   Another field mark good for LB is the barring on the breast.  A SB has more of a spotted breast.  Actually the one to the right might be one too.  The one in back to the left is a SB.  On that one you can see how the V that is formed by the supercilia is pinched at the bottom of the vee.  This is caused by the loral angle being obtuse. 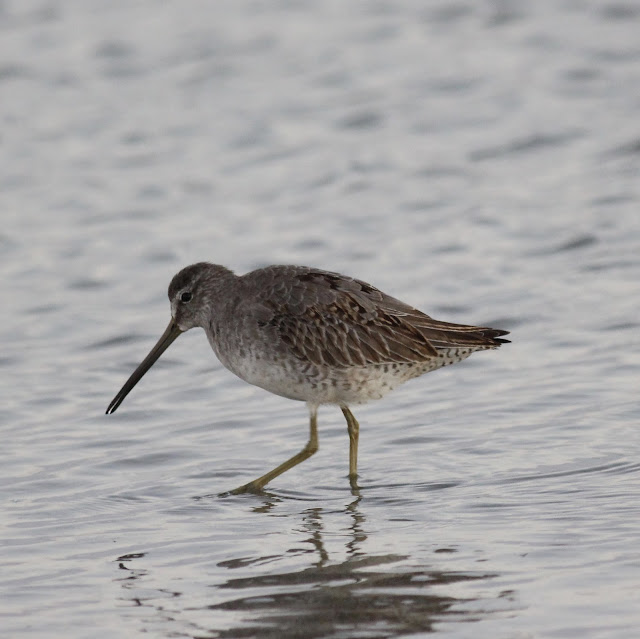 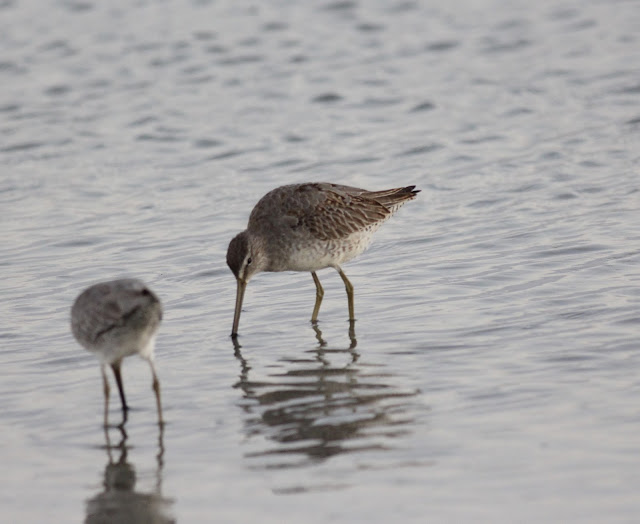 Here you can see the V is not pinched because the loral angle is acute (small).  Also note the Quasimodo hunchback. 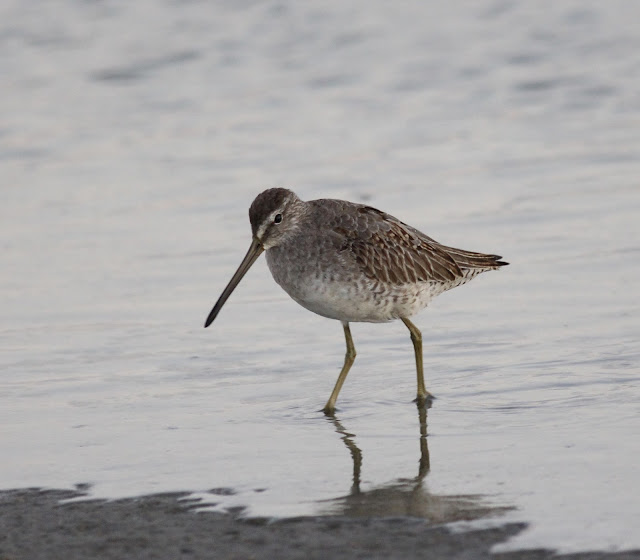 Have you ever seen such a-cute loral angle? Harharhar.... 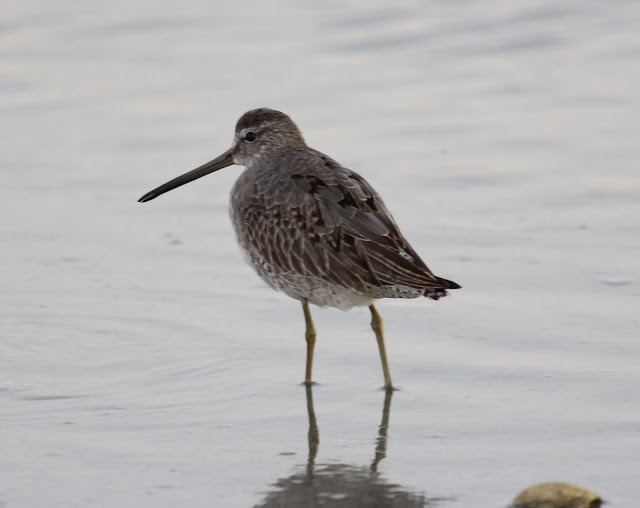 You can barely see the tail here, but look at the black bars, they are wider than the white are they not? 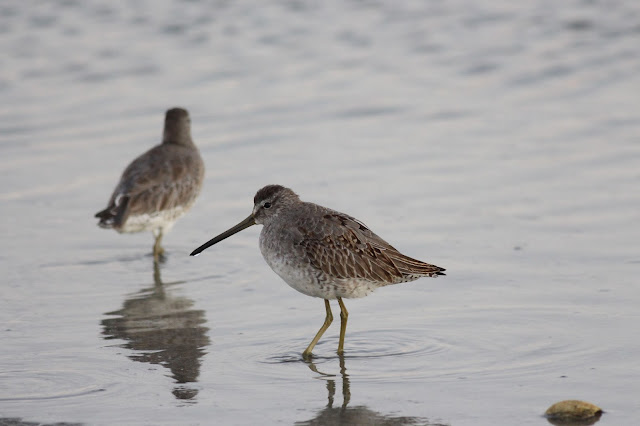