After a couple days birding on the OBX, what is the first thing I wanted to do on a dreary Sunday?  Go birding of course.  The kids had stuff going on and the wife also was occupied so I headed down to Fort Fisher for the high tide shorebird party on the rocks. 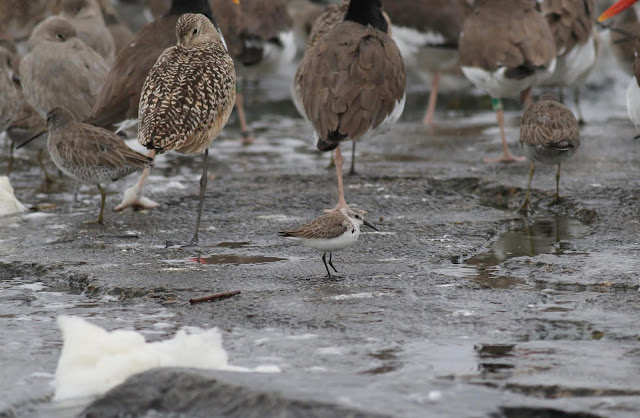 This lone Western Sandpiper was unfortunately missing a foot.  This seems to happen quite a bit for shorebirds.  I wonder if it is infection that does it, or maybe they get their foot stuck in a clam or something.  Perhaps a tussle with a crab?  Peeps are easy to ID this time of year, its usually a Western but the only other option is Least and they have yellow legs.  Semis are somewhere in South America. 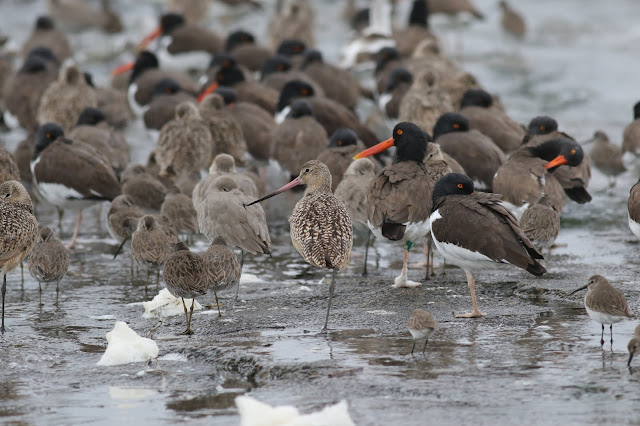 The rocks at high tide is one of the best places for Marbled Godwits.  One day a rare Godwit will show up. 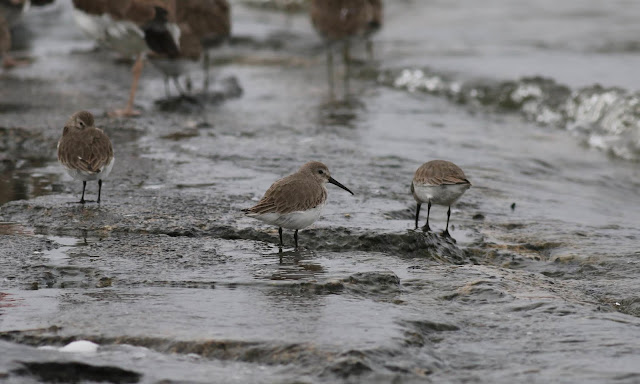 Dunlin are the most numerous shorebird this time of year. 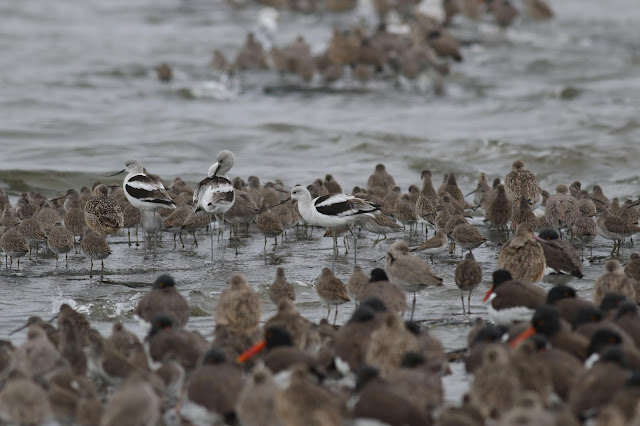 American Avocets are somewhat rare down in Wilmington but we get a couple every year.  This year a presumed family unit has taken up residence. 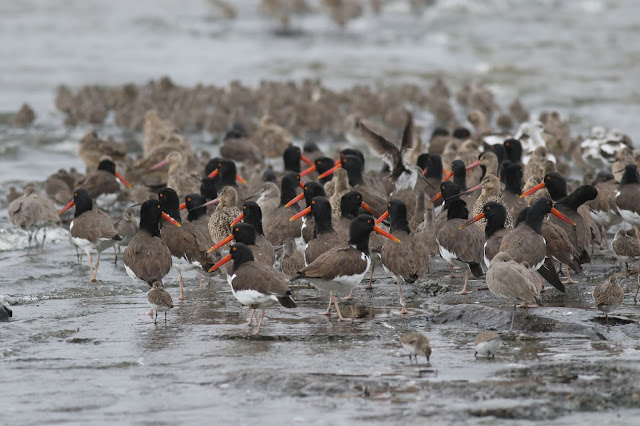 American Oystercatchers are a boisterous bunch. 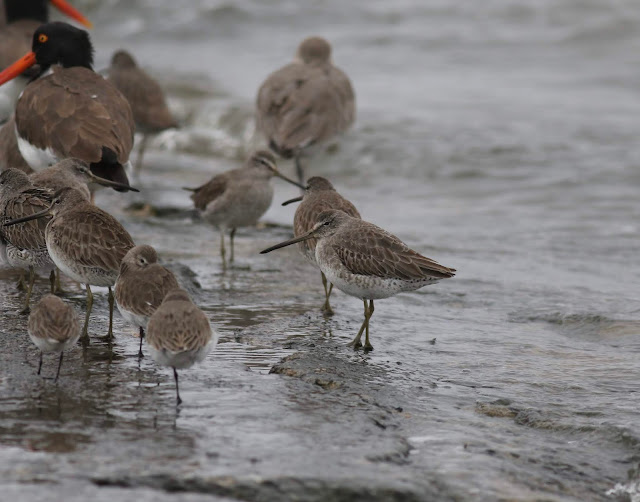 Short-billed Dowitcher - it has been said by one of the Carolinian bird Gods that dowitchers should be entered as Dowitcher sp. in eBird when a positive ID has not been confirmed.  Well that may be the best way to handle it in a transitional zone where there is significant overlap, but I find that 99% or more of the dowitchers I scrutinize in the salt water habitat in Wilmington are Short-billed, so I will continue to add them as such on eBird when I find a large grouping.  I do always scan for particularly obvious LB Dows, but rarely find them.  This one in center frame is obviously a SB.  The bill is short and kinked, the super cilia flares near the lores and although it is hard to see here, it had more white on the tail than dark.  Also, the back does not bump up like a proper LB Dow does giving it the appearance of having swallowed a grapefruit. 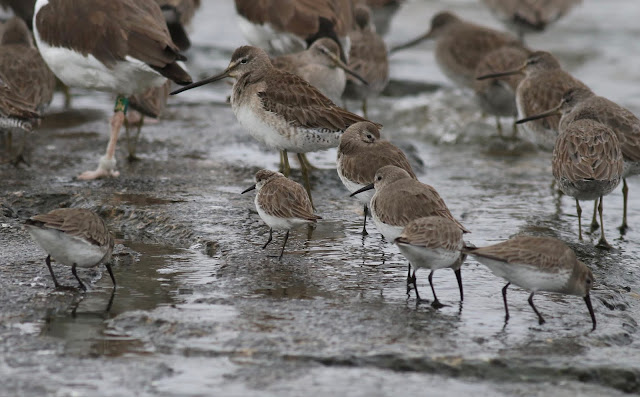 Another look at our unfortunate gimp Western SP.

At the Coquina Rocks I bumped into Shun and chatted for a while.  Shun is always fun to shoot the breeze with. 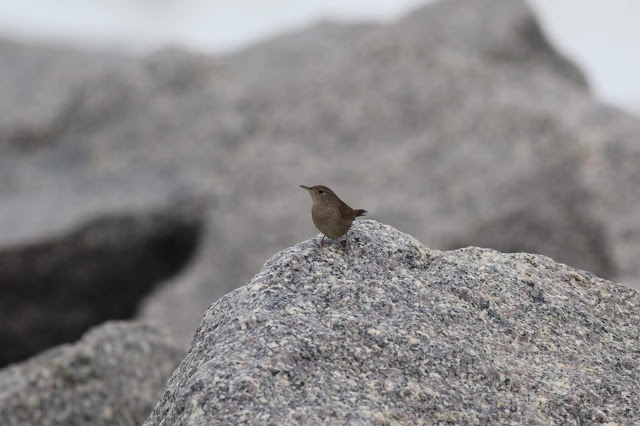 Shun gave me a heads up on the Green Heron hanging out at CB lake so I headed up to have a peek.  Although I am mostly a solitary creature when it comes to birding, I do like to share notes with other local birders which sometimes pays off in getting some inside scoop. 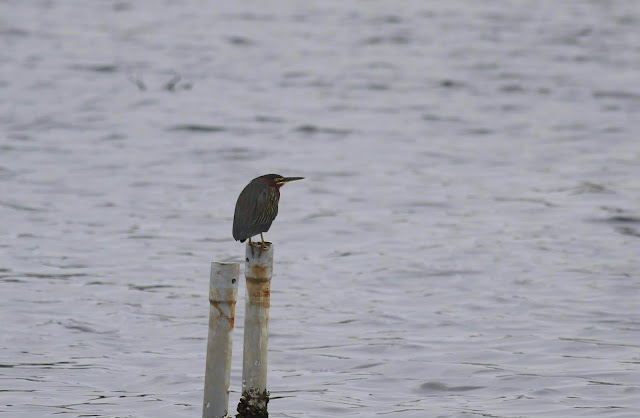 Green Heron - he was right where Shun said he was..  It is unusual to find them this early in the year.

The rest of these photos are bibs and bobs from around town before and after work.  Getting a nice stroll in is absolutely crucial when working a 9-5 for keeping a man/woman sane. 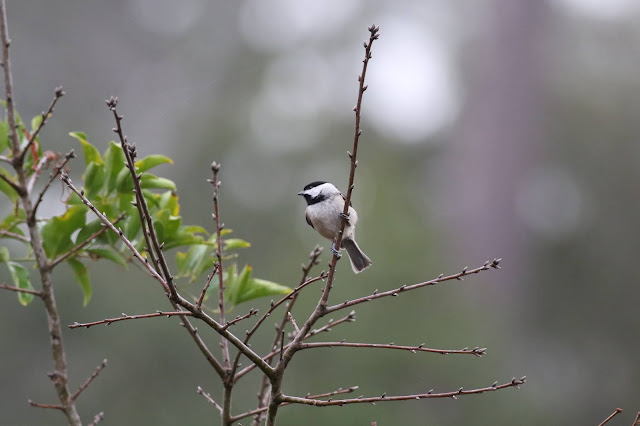 Carolina Chickadee - I had been neglecting my usual haunt of Carolina Beach State Park so I headed down to pick me up some year birds. 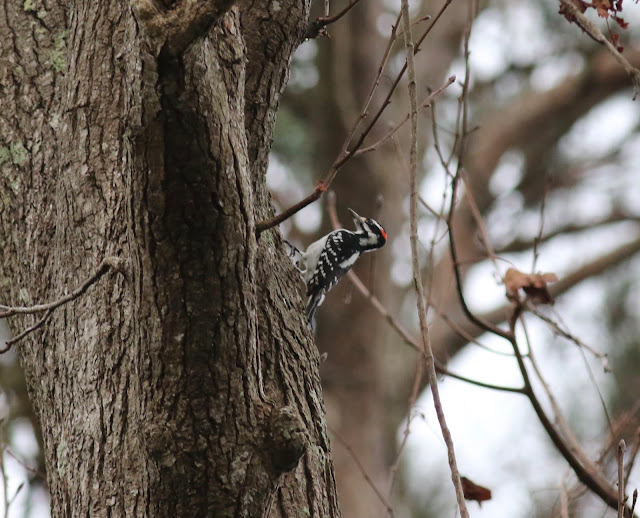 Hairy Woodpeckers are scarce in Wilmington, but a certain honey hole in CB State Park is reliable for them every year for the past 4-5 years. 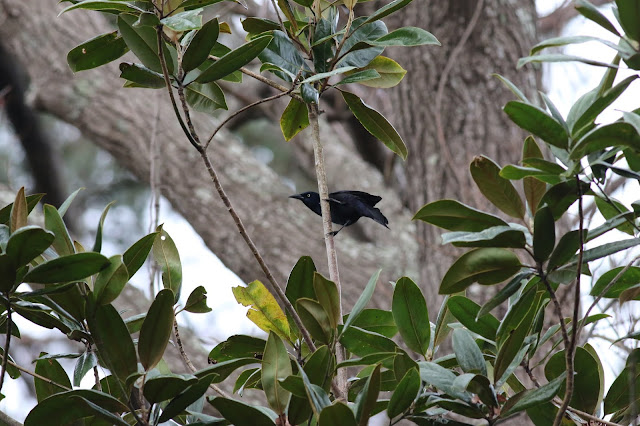 Common Grackles can easily be found when they are in town as they make a racket sounding like a million squeaky doors opening and closing. 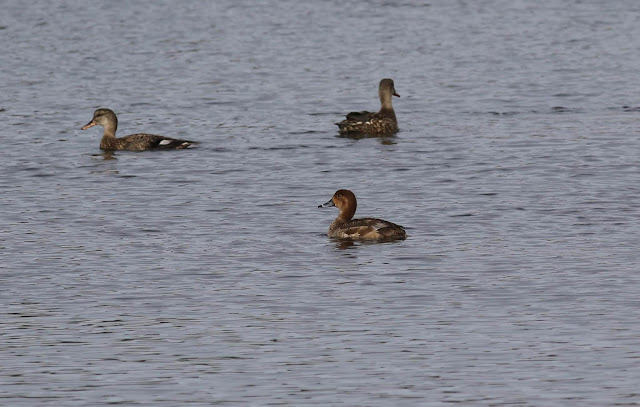 Female Redhead - Ashley HS has been a great place to pick up all the ducks but you have to visit many times to get the odd duck.  The turnover is pretty good although there are some resident birds too. 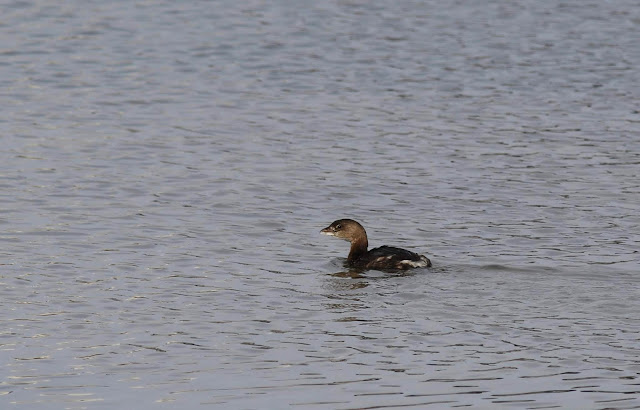 Pied-billed Grebes have the coolest "song" and if you are lucky enough to hear it you will be looking all over for something bigger like a loon or something.  However, look no further because this little crooner is the Pavarotti of the pond denizens. 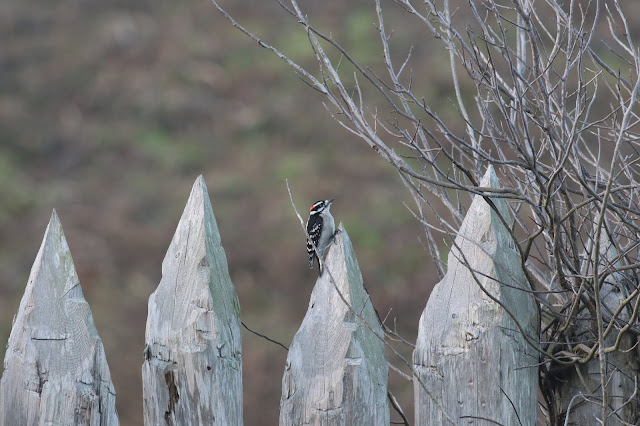 Downy WPs are the more common of the two local wintering Picoides.  The short stubby bill is a dead-giveaway. 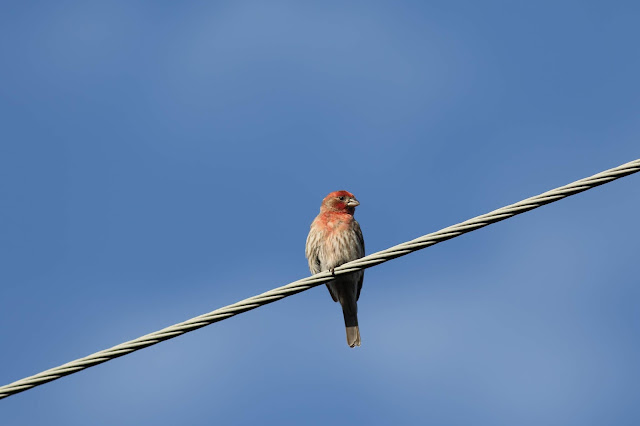 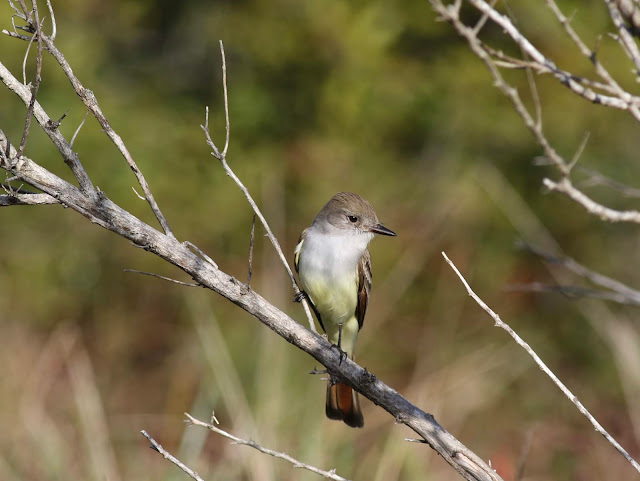 Ash-throated Flycatcher - this is my best self-found bird of the year so far.  I found it at Fort Fisher just south of the monument.  Unfortunately, the weekend after I found it, there was a huge civil war reenactment and I don't think anyone else got to see it.  Apparently Ash-throated Flycatchers don't like cannon fire and/or rednecks celebrating a racist past.  Not that I think any of my readers will argue with me, but to pre-empt some flamer coming at me, I will explain myself.  I drove by the parking lot at this reenactment on the weekend and many of the cars in the parking lot were festooned with the Confederate Flags and Assault Life stickers (think AR-15s).  Also, out of the hundreds of people enjoying the festivities, 100% of them were white as snow.  Sure there were some "blue coats" but I got the feeling they were paid actors and were the butt of the show.  Were there one or two true war enthusiasts that were not there because they were racist? Maybe.  It's possible a couple people just took their kids for the spectacle of it all.  Nevertheless, I don't think it was a very welcoming scene for anyone not white.  This is the part of living in the south that I hate.  Why can't we all just get along and move past the bigotry of prior generations?   I have ancestors that were undoubtedly racist, but the last I would do is celebrate their "heritage" in that way.  I celebrate their heritage by making a mean Shepherd's Pie or having some good Belgian beer.  So much more satisfying focusing on the positive.  Sure, we should not forget what has happened but let's try and not celebrate it and re-enact it. 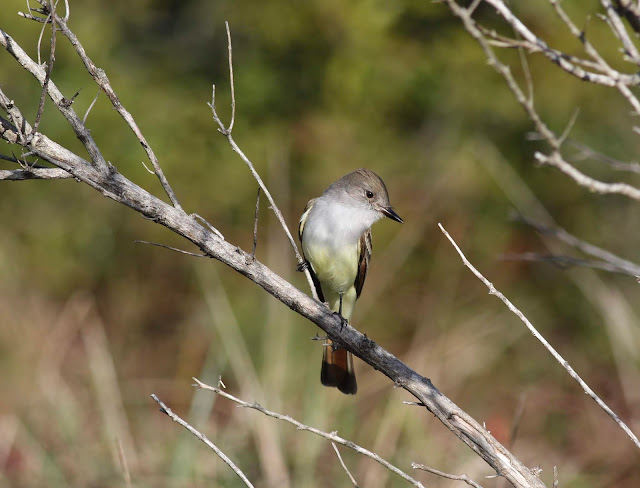 Ash-throated Flycatchers are not racist...

What better way to end the day than to showcase a bird that has no qualms about mixing black and white. 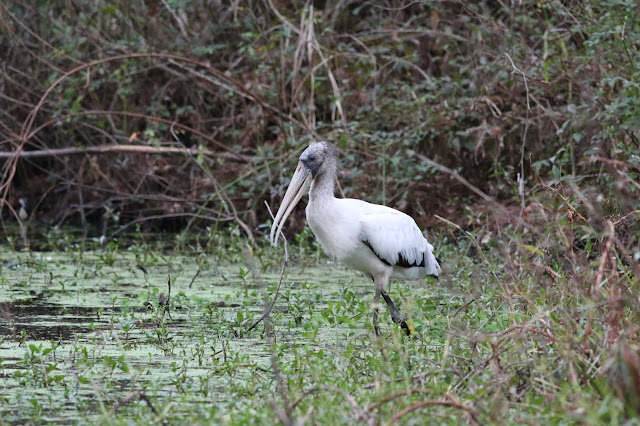 Wood Stork!  Amy and Kevin M texted with a Wood Stork sighting at Greenfield lake and it did not take me long to find it.  I am amazed this photo came out even though the sun had already set.