Work has been hot and heavy, but that's not always a bad thing.  Seeing that my HQ is in Durham and I had a 3 day work trip, I tried some forays to pick up a couple year birds in the triangle after working hours but before total darkness.  Consequently I did not come out with any decent pics due to fading light.  However, on the way to my hotel on the first night I stopped at Mid Pines Rd in Raleigh and early picked out the continuing Greater White-fronted Goose. 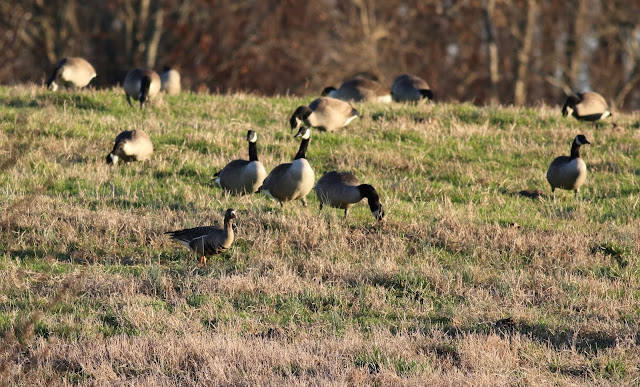 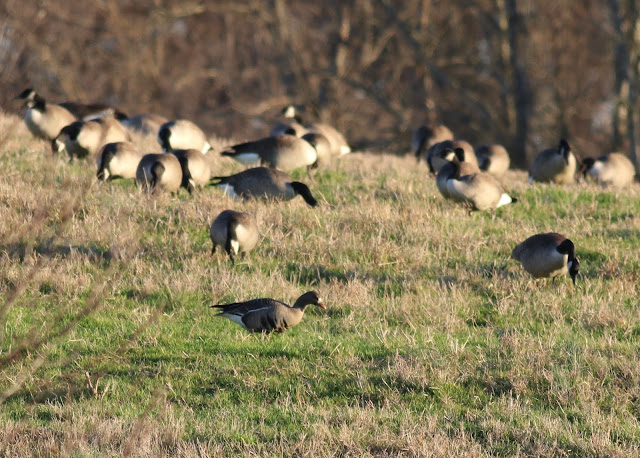 I tried for Woodcock one night at Mason Farm but the moon was full and probably it was too light out.  I think Woodcock are wary about practicing their rituals when an owl could easily see them.

Work ended early on Friday and instead of heading home, I figured why not head to the OBX for some winter birding.  My house to the OBX is about 2 hours further than Raleigh mainly because the roads are twisty and you have to drive through numerous towns.  From Raleigh it is a straight shot on the 64.  The wife gave me her blessing and I was off!

I actually made it to Alligator NWR by 4pm and had a solid hour of birding but I had no luck finding the Rough-legged Hawk or a Golden Eagle. 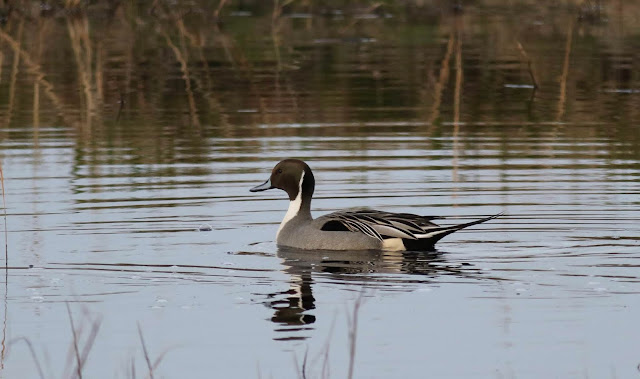 I stayed in Kitty Hawk and headed to Bodie Island first thing to look for rails. 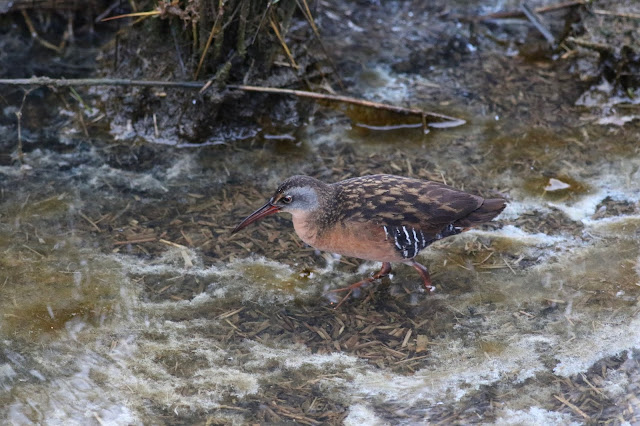 Virginia Rails were out foraging and not paying me any mind.  I didn't see any Kings.

Next stop was the Pea Island Photo Blind to look for the Eurasian Green-winged Teal. 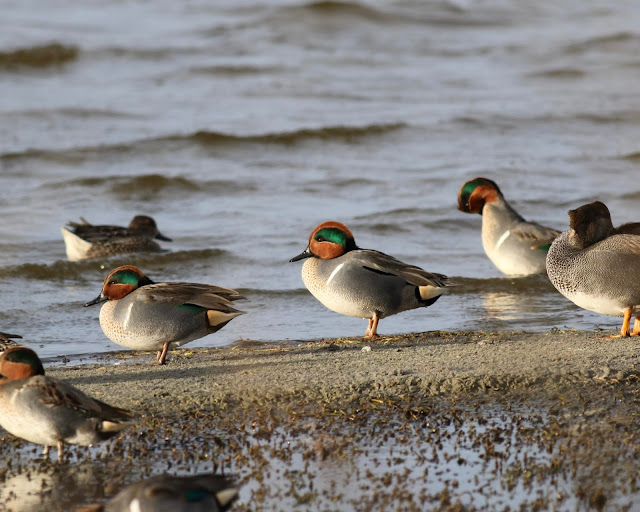 Plenty of regular Green-winged Teal but no Eurasian.  For the uninitiated, the eurasian sub-species has a horizontal white stripe starting at the shoulder instead of the vertical one as seen on this American cousin. 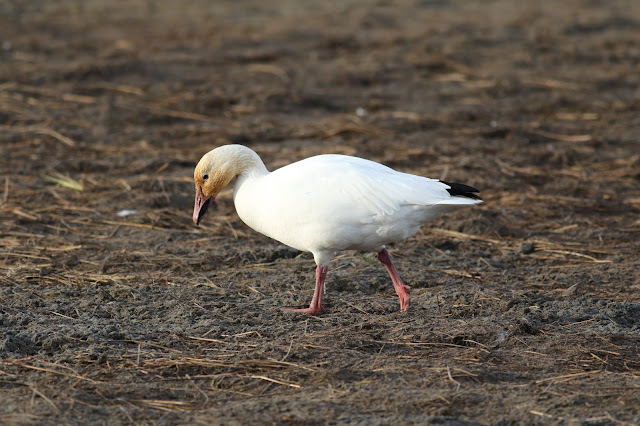 Snow Geese were numerous and rooting around the shoreline of North Pond. 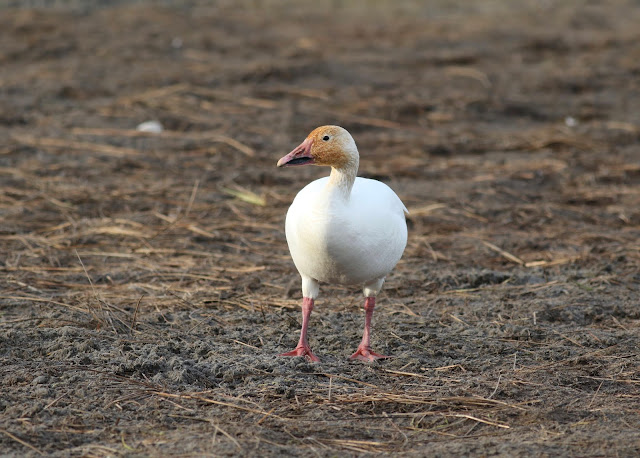 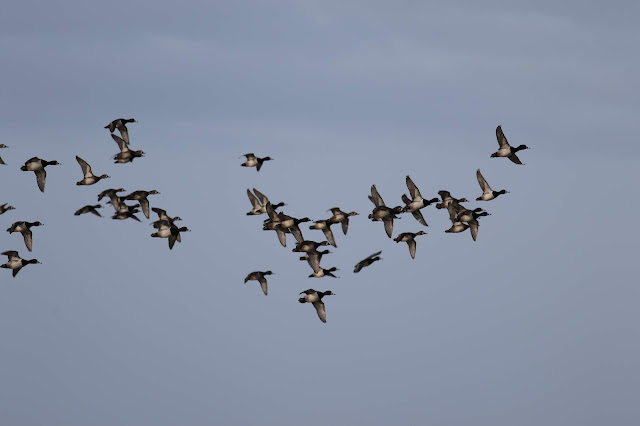 I love trying to ID ducks on the fly. My initial guess on these was Scaup.  However, after checking my camera, I saw they were Ring-necked Ducks. 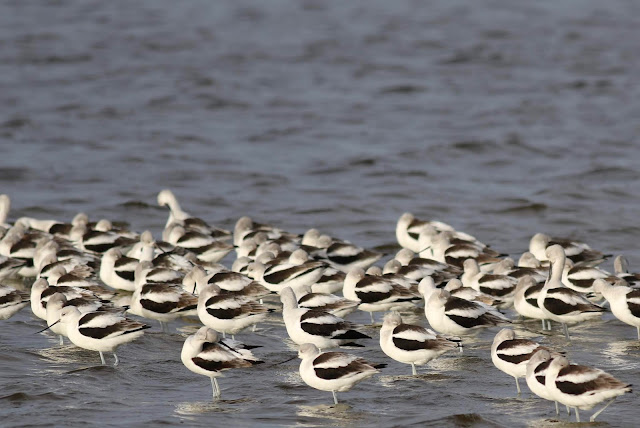 Jeff L arrived and was also looking for the Eurasian and it did not take long for him to find it from another angle. 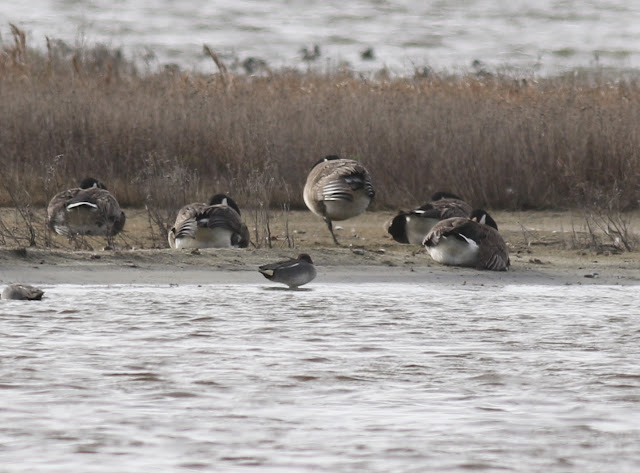 Eurasian Green-winged Teal - too bad it was so far off.  Both Jeff and I were hoping for a decent picture to add to our archives. Jeff has probably the largest list of species photographed in NC and most if not all were photographed in Dare County.

We were chatting when I looked up and saw this guy fly directly over our heads.... 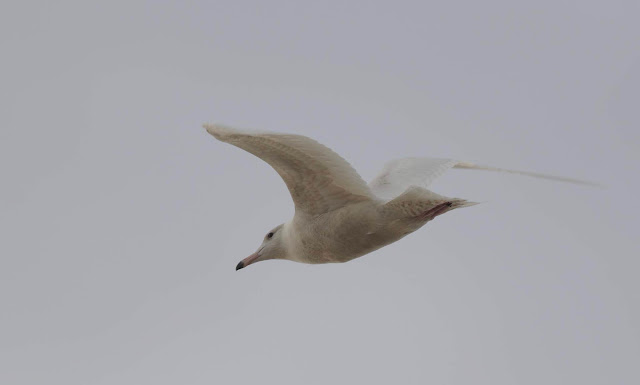 Glaucous Gull - Jeff somehow snapped a much better photo than I got.  I think I need to change my photo settings to rapid fire and bracketing.  I have been avoiding it as I already spend way too much time deleting photos and bracketing creates 3 for every one.  Bracketing is the practice of having your camera automatically shoot three photos in rapid succession with different exposure levels.  The rationale that one out of the three will come out better in different light conditions.

Jeff and I parted ways and I headed to the old Coast Guard Station. 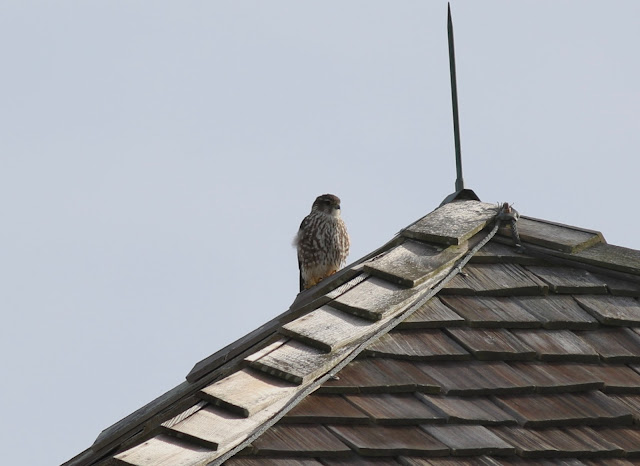 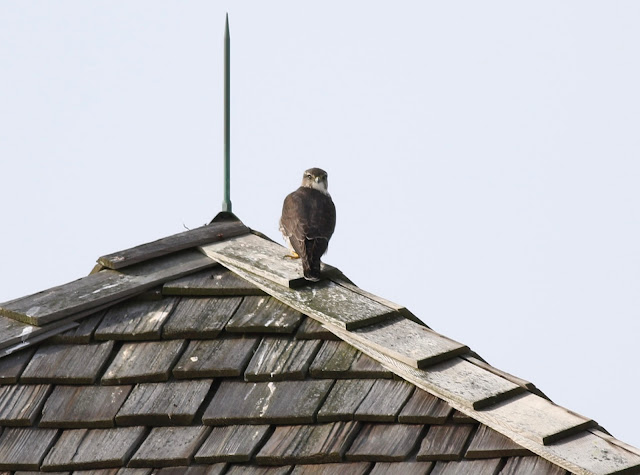 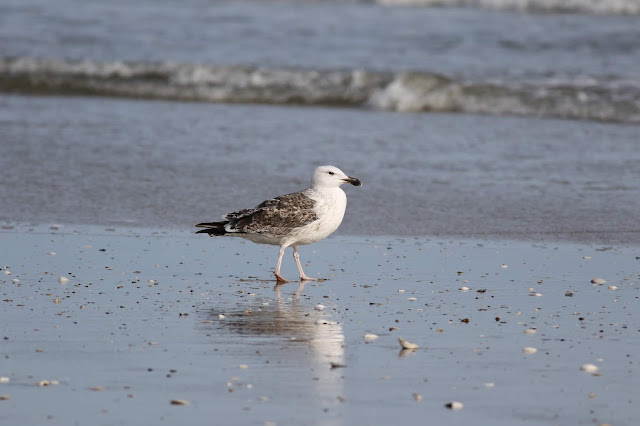 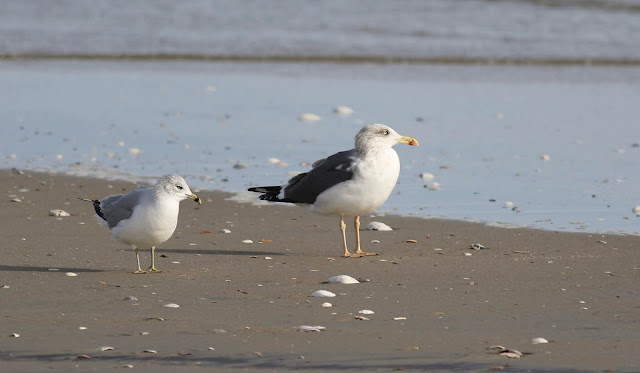 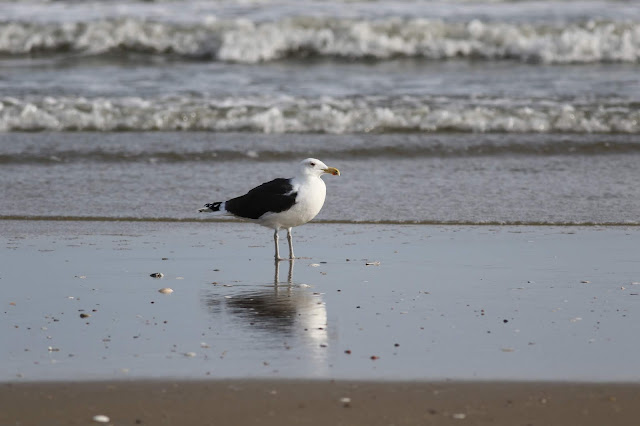 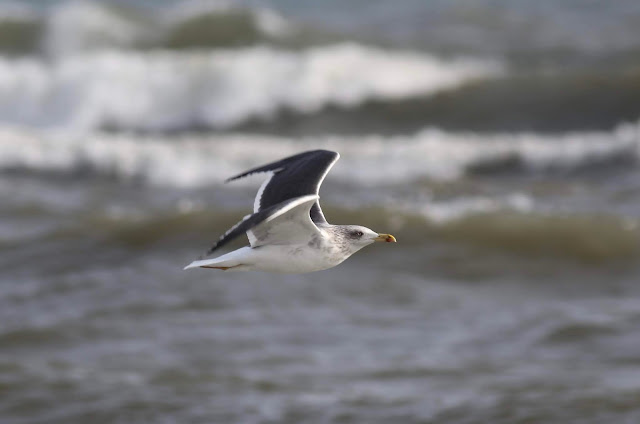 A little later at Jeanette's Pier, I could have sworn I had a Harlequin Duck but it was far off and my pictures sucked so I decided to not list it.. 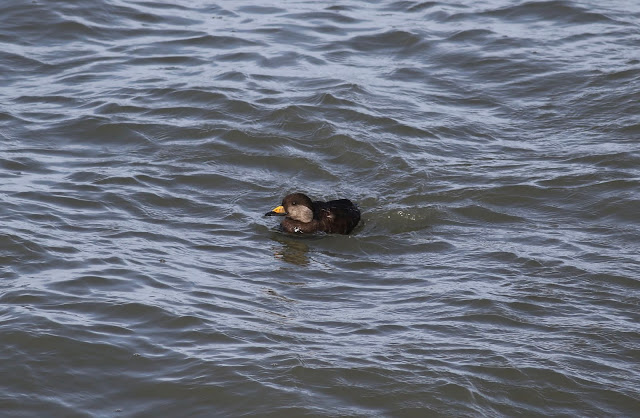 This Black Scoter was more accommodating.

I headed to Alligator to spend the early afternoon looking again for the Rough-legged and Golden Eagle.  Those are both birds I am looking to improve pictures on. 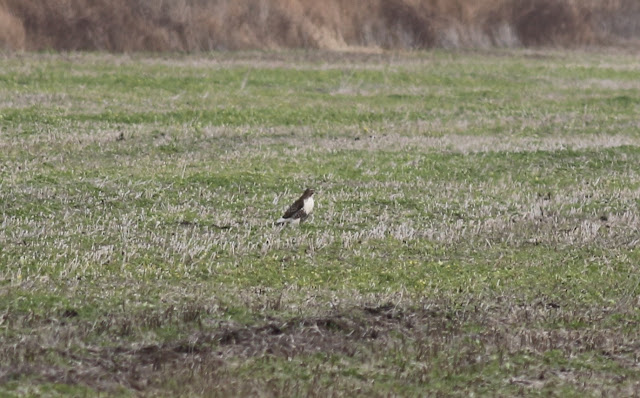 A Red-tailed Hawk with a dark belly band was masquerading as the Rough-legged, but the head was way too dark.  RLHAs have lightly marked heads and also some patterning on the breast. 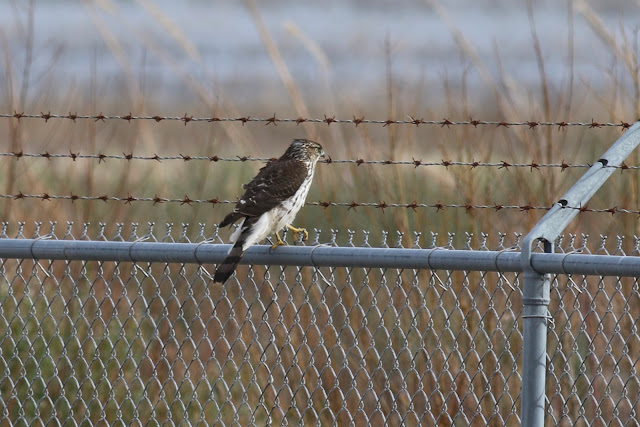 This young male Cooper's Hawk was so small I almost mistook him for a Sharpie.  However, if you look at the graduated sides of the tail tip it gives it away.  I only say male because it is so small.  Female Cooper's Hawks are larger than the males.

My final stop was Pungo NWR to see the Snow Goose and Tundra Swan snow storm.  Every evening and morning the geese and swans switch places from evening roost to morning feeding spots in the fields.  The sight is one of the wonders of the world as far as I am concerned and I will not even attempt to add pictures to show it.  These spectacles are best seen in person, kind of like the Grand Canyon or Machu Picchu. 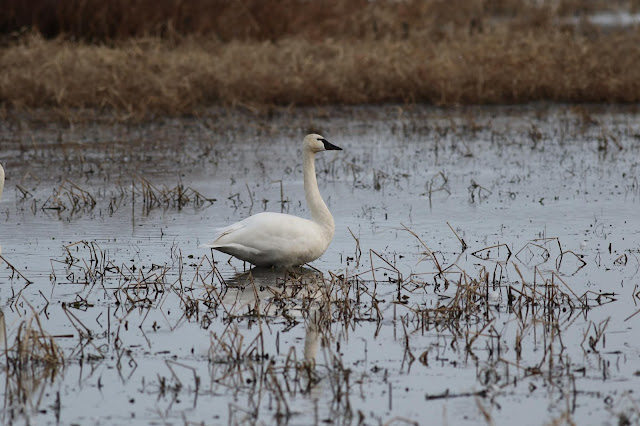 I hate to end it on such a poor photo, but the light was fading and these guys were far off in a field at Pungo... 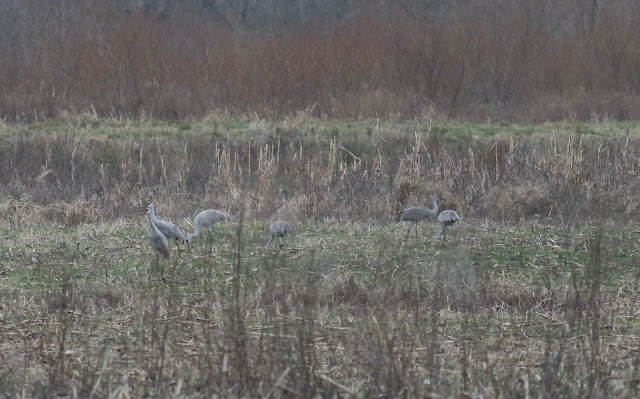 The ride home was uneventful and I made it home in time for a late dinner.